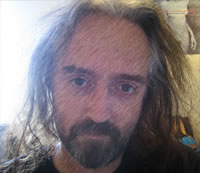 Hello, and welcome to “Rant In A-Minor”; a place of quiet, philosophical contemplation and spiritual peace … or, if I’m being brutally honest, it’s more a place for angry diatribes and rampant bitching.

My name is Kris King, and this is where I rant about things …

As a life-long sufferer of a condition once referred to by a friend as “early on-set Victor Meldrew Syndrome”, I find that I’m often unable to prevent myself from lapsing into sustained (and usually quite sweary) rants on any number of subjects, much to the annoyance of friends, family, and everyone else in the queue at the garden centre.

However, as one of those evil, blaspheming, angry, heathen, atheist-types, the one subject I find myself most often turning multiple shades of purple over is that of religion. I find it both morbidly fascinating and teeth-grindingly infuriating in equal measure, and its capacity for repeatedly pushing me to the very edge of my sanity is seemingly infinite.

The truth is I’m actually quite a nice, considered, and somewhat introspective person for the most part; okay, yes, I can be a bit arrogant and annoyingly sarcastic (caustic even), but I’m no different from anyone else … every once in a while, we all reach that point where it seems like the only options left are either to have a massive aneurysm, or find some way of venting. Well, this is mine …

I’m sure that I could find ways to express myself more calmly, or indeed creatively, other than simply ranting about something that winds me up … there may even be those who’ll say I’m doing both myself, and others, a disservice by adhering to a tired-old “angry atheist” stereotype, but I’m inclined to disagree. It’s more that I’m frustrated by so many things in the world that seem, to me, to be broken and in desperate need of repair.

I don’t imagine for a second that I’m able to fix any of them (nor would I claim to), but I can, however, at the very least draw attention to the fact that not everything around here is working the way it should be … the squeaky wheel gets the grease, so to speak. Either way, this is my humble attempt to make a small, but hopefully positive, difference.

“Rant In A-Minor” is a fairly unsubtle reference to Bill Hicks who, while not an atheist, was one of a number of people who had a profound effect on the way I think and see the world; a change he achieved while occasionally making use of loud, rude words.

Who am I to dismiss such a worthy tradition?

P.S: If you want to get in touch for whatever reason, if you’ve got a blog or website you think I might like and should link to, drop me an email at the address below! I might not be able to reply right away (job, life, other things to deal with etc.), but I promise I will reply!

Disclaimer
Except where stated to the contrary, either explicitly or implicitly (particularly in the case of comments left by third-parties), this blog is entirely the work of its author/owner, Kris King, and all rights of ownership that it is possible to assert have been asserted (quite loudly, and with one or two naughty words). No part of this website may be used, reproduced, modified, ingested, or otherwise buggered with in any fashion without first obtaining the express permission of the owner. This excludes content summaries intended for the purpose of linking to and promoting this blog (feeds and such) – that’s okay, you’re allowed to do that.

All opinions stated within this site are exclusively the personal views of the owner, or of individual third-party commenters. Responsibility for all opinions expressed rests entirely with the individual making them and, as such, the owner of this site will not be held liable in any way for the actions and/or words of anyone else. If you end up in the shit because of what you’ve said here, you’re on your own. Opinions expressed by the owner are not intended to harm, malign, libel, or defame, any individual, group, religion, club, company, agency or organisation, especially those with enough money to sue. By reading this blog you are agreeing not to hold the owner liable for any such misguided attempts to express himself.

Similarly, the content of this site does not in any way represent any third-party with whom it is possible for the site owner, or third-party commenter, to be even remotely associated. Neither my employer, nor any other organisation, group, agency, or individual with whom the owner of, or contributors to, this site may be related, linked, or implicated, is in any way responsible for what goes on here, nor should any association be made (especially as regards my employer – I love my job and would ideally like to keep it). Additionally, no attempt should be made to conflate the opinions expressed here, by anyone, as having anything to do with the facts. These are an individual’s views, not an expression of absolute truth (or, indeed, absolute anything, except maybe bollocks).

Neither the site owner, or any contributors, will be held liable for issues of language, culture, libel, or defamation insofar as it pertains to any other nation from which it is possible to view this site’s content. If something expressed here in a contributor’s own language translates really badly into yours, it’s no-one’s fault. If something expressed here is considered offensive or even proscribed in your country, it’s your responsbility to leave this site and go somewhere else less problematic. Also, neither the owner or contributors will be held liable should their rather feeble language and spelling skills result in bad grammar or punctuation that adversely affects the meaning of a statement.

The content of this site is deemed valid at the point at which it is created but, given the highly transitory nature of information, particularly on the internet, this cannot be relied upon in any way. The site owner will not be held liable for the likelihood that things he, or the people who for some reason contribute to the site, stated at any point end up being completely wrong at some point in the future. We’re all human, we all make mistakes, and neither this site’s owner nor its contributors can be held responsible for how the future messes up their stuff. Similarly, the site owner will not be held liable for the contents of external sites to which it links or refers. Once you leave here, you’re on your own.

This site, or its owner, does not share personal information with third-parties, nor is any stored information collected about your visit used for purposes other than to analyze site traffic and content performance through the use of cookies (which you can turn off via your browser settings).

The site is not, through its operation and provision of content, intended in any way to make money. I’m not getting paid for this – chance would be a fine thing. If anything, this site costs me to keep it alive, so be respectful – if you don’t behave, none of you will have nice toys! While we’re on the subject, I’m placing a limit on damages against this site or its owner totalling £1 (GBP); seriously, I’ve got bugger all to sue for … really … I wish I was joking.